The extraordinary session of Ministers of Defence of the Visegrad Four (V4) countries, held in Prague on 17 December, confirmed the joint will and readiness to play important role of the Czech Republic, Hungary, Poland and Slovakia in protection of the Schengen Area and management of the migration cisis.

The session was convened by Czech Minister of Defence Martin Stropnicky within the authority of the Czech Presidency of V4 during 2015–2016.

V4 Will Help Macedonia if the Migration Gets in Strength

"We have come to the consensus, that the initial requirement to moderation of the migration crisis in Europe is the proper protection of external boundaries of the Schengen Area and keeping the agreed rules. We are glad that all European countires have come to the same recognition," said Minister Stropnicky at the press conference at the end of the session. He also appreciated Hungary in the timely and effective protection of its external Schengen boundary.

The senior representatives of V4 Defence Ministries have also agreed upon the fact that the key issue for security of the central Europe is stability of western countries of the Balkans. If the migration wave takes its strength next spring, the Visegrad countries must cooperate with Macedonia, or other countries of the Western Balkans, and in case of need be ready to offer them their joint security capacity including the military one. 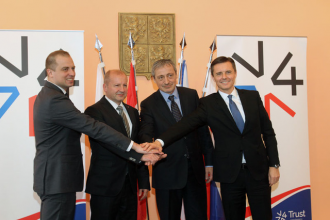 The V4 representatives also discussed the readiness to potential deployment of their EU Battle Group which is part of European security readiness forces for the first half of 2016. All representatives of the session have emphasised that it is necessary to keep the capability of this Battle Group also after 30 June 2016.

"Our aim is to keep the V4 as the strong, operational and the stable group within the Central European region. We highly support formation of this Battle Group," said Hungarian Minister of Defence Istvan Simicsko. The same opinion expressed also Polish representative Tomasz Szatkowski: "The birth of the Visegrad Battle Groups is the evidence that V4 countries are capable of creating their own (military) formation which supports overall interoperability for joint participation in operations."

Slovak State Secretary Milos Koterec added: "The Slovak Republic comes with the significant contribution to the V4 Battle Group. A unit of 536 of our soldiers will participate in it." The V4 defence cooperation will, under the Czech Presidency, continue also next year. V4 Political Directors of Ministries of Defence and Chiefs of General Staffs will meet right at the beginning of the next year.

Source: Ministry of Defence and Armed Forces of the Czech Republic