In the first part of the meeting, the delegations reviewed the program and priorities of the Czech presidency, as well as the planned calendar of events. They agreed that the documented objectives and goals, although ambitious, are also realistic and achievable, highlighting the fact that, although the strategies were conceived during the Hungarian and Slovak presidencies, it is now time for concrete projects to be implemented.

The Czech presidency considers air cross border operations to be the most promising area of cooperation within the V4 format. To demonstrate Czech commitment, the Air Chiefs of the V4 countries were invited to take part in the second session of the negotiations. The delegations agreed that a network of bilateral CBO agreements was a good first step, although in order to further enhance the effectiveness of intercepting missions the signing of a multilateral agreement should be taken into consideration.

The establishment of a Central European aviation training center was also discussed, with many of the delegations expressing their interest and support, and it was agreed that this issue should be further negotiated on a higher level. 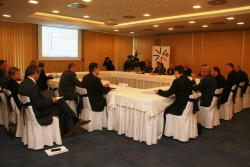 The Defence Policy Directors also reviewed the status of the V4 EU Battlegroup which will be on standby in the first half of 2016, and also confirmed that the preparation of the BG has been steadily progressing. In this respect, it was agreed that the possibility of developing a permanent Visegrad modular force would be investigated, as requested by the V4 defence ministers in the Long Term Vision of the Visegrad Countries on Deepening Defence Cooperation [.PDF].

With regard to the new EU Security Strategy, it was agreed that coordination of the V4 joint stance be dealt with by the Ministries of Foreign Affairs in order to effectively represent national interests. The delegations agreed that a further meeting should be held to discuss the creation of permanent modular forces, and to consider and respond to the question of a common V4 contribution to the VJTF.

After the meeting, the officials of the various delegations had the opportunity to visit the NATO Days static exhibits and then watch a dynamic air show at Ostrava Airport.

Source: Ministry of Defense of the Czech Republic