Visegrad Insight No. 6 Out Today


The sixth issue of Visegrad Insight (2/2014) gets officially published later today at the European Forum for New Ideas in Sopot, Poland 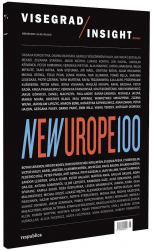 The issue introduces to its readers the idea of one hundred stories of outstanding individuals and teams of individuals from new EU member states and their neighbors to the east and south. Uniting these individuals is their shared courage for innovation, the love of big ideas, and a potential for global outreach.

Res Publica, the publisher of Visegrad Insight, came up with the idea and teamed up with the International Visegrad Fund, the Financial Times, Google, and many other institutions from around New Europe to develop a list of 100 challengers—identifying the most interesting movers and shakers from the region. Together with the NE100 list and in-depth stories of some of the challengers, the team prepared an issue of social, political, and, most importantly, economic reports on the question of the new economy of New Europe. Will this be the new drive for our countries?

Can Visegrad be crowdfunded?—The editors present a pioneer study, the first time ever report on crowdfunding in the region. Authors Olga Urbańska (Res Publica) and Maria Staszkiewicz (Aspen Institute Prague) argue that as a valid instrument of financing initiative and ideas, crowdfunding could generate a new dimension of economic and cultural cooperation in the V4 countries, strengthening people-to-people contact. If well organized, the platform would eliminate many accounting problems that campaigners have when fundraising abroad.

The new issue also has interviews with the President of Estonia, Toomas Hendrik Ilves, on the role of innovation in the transformation of political culture in Estonia; Jerzy Buzek, former president of the European Parliament, on the energy policy of the European Union; and Olaf Osica, director of the Centre for Eastern Studies (OSW), who assesses the challenges and prospects for cooperation of the Central European countries.

The new issue is out on-line as of October 2, 2014. To purchase the new issue, as well as all back issues, please visit: http://visegradinsight.eu/shop/.

...
Visegrad Insight is an analysis and opinion journal led by accomplished editors from the Visegrad Group countries: the Czech Republic, Hungary, Poland, and Slovakia. Its aim is to provide a platform for high-profile debate on the perspectives and challenges for cooperation of the Central European governments, business and communities. Published twice a year by Res Publica, Poland, funded by the International Visegrad Fund.