Meeting of the Directors General of V4 Customs Administrations 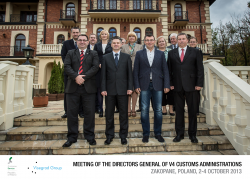 The meeting of Visegrad Group Customs Director Generals was held in Zakopane on October 3, 2013. The talks included among other things the issues related to the fight against customs fraud. The agenda consisted of crucial topics for the countries of the Visegrad Group as the phenomenon of customs undervaluation, which has a direct impact on customs revenue flowing into the EU budget and for the customs duties and taxes on imports flowing into the national budgets of the Member States.

Another topic was the cooperation on control of movement of lubricant oils to fight tax evasion due to their illegal use as a fuel. The problem is not understood in the same way in the European Union however its importance is fully recognized among the Visegrad Group.

The conclusions of the meeting will give impetus to further cooperation in the fight against customs fraud at the expert level. The meeting of experts dealing with issues related to the exchange of customs information will be held soon in Bratislava.

It is worth underlining that meetings within the Visegrad Group provide a common approach to major issues and greatly facilitate cooperation in the region of Central and Eastern Europe.